When plant species invade new areas, they can escape from specialist enemies and thereby reduce investment in chemical defense. Enemy release may have other impacts on plant chemistry; in the absence of specialists, plants may be able to increase production of volatiles that enhance attractiveness to pollinators. In the United States (US), the introduced Eurasian wild parsnip, Pastinaca sativa, has long been subject to attack by an introduced coevolved florivore, Depressaria pastinacella, the parsnip webworm. In 2004, webworms were found for the first time attacking parsnips in New Zealand (NZ). Relative to US P. sativa, NZ P. sativa produces lower levels of defenses but higher levels of certain floral volatiles, suggesting that escape from its specialist florivore may have resulted in changes in volatile profiles to increase pollinator attraction.

In this study, we examined the influence of wild parsnip floral volatiles on pollinator attraction and seed production in NZ and the US. While many insect groups were observed on parsnip umbels, the percentage of flowers that set seed could significantly be predicted by the occurrence of large calyptrate flies and small syrphids in both localities. In the US, β-pinene, γ-terpinene, hexyl butyrate, octyl butyrate, germacrene D and an unknown monoterpene were all positively correlated with visitation by large calyptrates and small syrphids. In NZ, trans- ocimene, carene and octyl butyrate were positively correlated with visitation. Remarkably, most compounds positively associated with visitation are produced in significantly higher proportions in NZ flowers, suggesting that NZ flowers, in the absence of specialized florivores, may be chemically better constituted to attract pollinators.

May Berenbaum, University of Illinois Urbana-Champaign 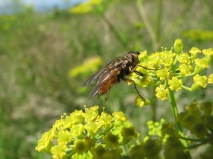