Do abundance and proximity of the alien Impatiens glandulifera affect pollination and reproductive success of two sympatric co-flowering native species?

In invasion ecology, potential impacts of aliens on native flora are still under debate. Our aim was to determine the pollinator mediated effects of both proximity and abundance of an alien species on the reproductive success of natives. We chose the highly invasive Impatiens glandulifera and two native species: Epilobium angustifolium and Aconitum napellus ssp. lusitanicum. These species share characteristics allowing for pollination interactions: similar biotopes, overlapping flowering periods and same main pollinators. The effects of abundance (5, 25 and 100 individuals) and proximity (0 and 15 m) of the alien on visitation rate, insect behaviour, pollen deposition and reproductive success of both natives were investigated during 2 flowering seasons. We used centred visitation rates as they can be directly interpreted as a positive or negative effect of the invasive.

Both abundance and proximity of the alien increased bumblebee visitation rates to both natives. On the other hand, abundance of the exotic species had a slight negative effect on honeybee visits to natives while its proximity had no effect. The behaviour of bumblebees changed as visitors left significantly more often the native plants for I. glandulifera when its abundance increased. As a consequence of this “inconstancy”, bees deposited considerable quantities of alien pollen on native stigmas. Nevertheless, this interspecific pollen transfer did not decrease seed set in natives. Self-compatibility and high attractiveness of both native species probably alleviate the risk of altered pollinator services and reproductive success due to the invader in natural populations. 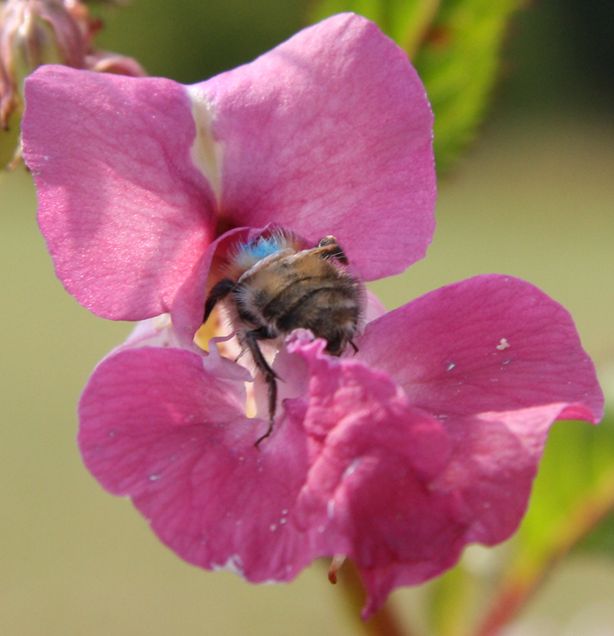